A precision components manufacturer in Toronto, Canada, approached us for help in streamlining their production. They were producing headed stepped pins ranging in length from 75-200 mm (3-8”) with a 5 micron, 0.0002” tolerance.

We came to them with our Tactic 8 Grinding Cell solution. 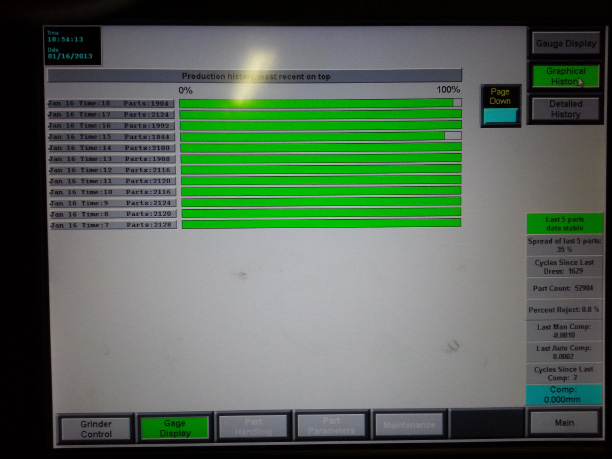 Hourly production chart on a Tactic 8 running 4 parts at a time with a 8 micron tolerance.

The method they were using required three different grind operations to produce the shape and the grinders were all hand loaded. The plant has an impressive amount of high end machines but a small workforce and these hand loaded grinders were hurting their capacity. The precision required meant that they had to rely on one skilled person to set up and adjust all the grinders.  So if an operation had a problem the machine was down until that skilled person was available.

The owner had purchased a fully automated cell for another aspect of the pin production and was looking for an automated solution again. He contacted us in the beginning of December after finding us through a Google search. The timing was perfect as we were just finishing a Tactic 8 that we could do a grinding trial on. We demonstrated that we could combine three grind operations in one and produce a higher quality part. He was facing a large backlog of orders and wanted our assurance that he could run Lights Out. He wanted the finished product to be placed in trays to minimize damage to the finished parts. So all he would need for Lights Out would be a longer inclined conveyor to take the finished parts away. A few weeks later we shipped him the Tactic 8 and in the beginning of January he was running production.

The owner is always the last to leave and first the first one in, he is the hardest working person I have ever met and he loves the machine. He loads up the hopper before he leaves at night and it is still grinding away when he arrives in the morning. Four weeks after contacting us his production problems had been solved!